Darjeeling is famous for Tea Gardens and legacy of its being the summer capital of British Raj. Darjeeling which used to be a small settlement during the British rule is now bustling modern city with all amenities and facilities. Darjeeling boasts of some iconic places of tourist interest like the Padmaja Naidu Zoological Garden, Himalayan Mountaineering Institute, Mahakal Mandir and the famous Ropeway. Chowrasta (referred to as the mall) is the most famous hangout destination for both locals as well as tourists, the Glenaries Cafeteria, the Keventers, Planters Club, the tea garden and Tenzing rock are places worth visiting in a Darjeeling package tour. Also you should not miss the tour to Tiger Hill, Batasia Loop, Ghoom monastery.

Short Itineraries from Gangtok How to Get Permits

Baba Mandir & Legend Of Harbhajan Singh
​Harbhajan Singh was a victim of battle at 14,500 feet  Nathu La Pass, during the 1965 Sino-Indian war. According to legend, Singh drowned in a glacier. His remains were found after a three-day search after his spirit helped the search party find his body. Indian soldiers believe that in the event of a war, Baba warns the soldiers of an impending attack in advance. During flag meetings both the Indian & Chinese set a chair aside to honor him. As soldiers any army official not maintaining a clean and disciplined attire is punished with a slap by Baba himself. Two shrines in his memory has been built, old one at the site of the bunker, where Baba Harbhajan was posted and the new one has been built at close proximity from Changu Lake on way to Nathula Pass from Gangtok. Do not miss the langar( Free meal) on Sunday by Indian Army. 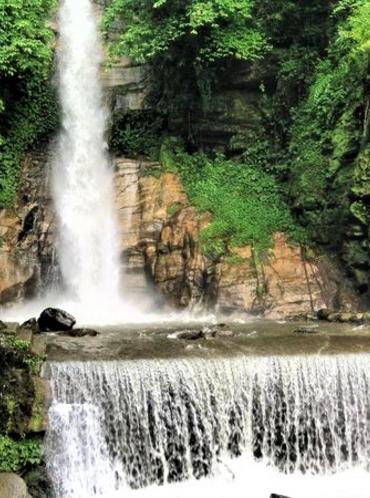 South & West Sikkim is not as popular among tourist as the North & East Sikkim but has huge potential to attract tourists with numerous attractions and picturesque landscape. Pelling howeveras is quite popular as there are some great local sightseeing places like the Rabdantse Ruins, Pemayangtse Monastery, Kunchenjunga Falls, Khecheopaltri Lake and Singshore Bridge are some of them. Barsey Rhodhodendron Sanctuary is famous for orchid flowers during summer. From Mainam Wildlife Sanctuary, Temi Tea Garden, Kitam Bird Sanctuary, Ravangla, recently build sky touching statues and temples in Char dham in Namchi, South Sikkim has lot to offer nature lovers and people looking to spend a quite holiday in the Mountains.

​Rumtek is located 24 kilometres from Gangtok, the capital of Sikkim, at an altitude of about 5100 Ft. Originally built in the mid-18th century, Rumtek served as the main seat of the Karma Kagyu lineage. Rangjung Rigpe Dorje, 16th Karmapa, arrived in Sikkim in 1959 after fleeing Tibet after Ghinese occupation, with the generosity of the Sikkim royal family and the locals, it was rebuilt by the as his main seat. The sacred items and relics brought out from Tsurphu Monastery, the Karmapa's seat in Tibet, were installed. The monastery is currently the largest in Sikkim. It is home to the community of monks and where they perform the rituals and practices of the Karma Kagyu lineage. A golden stupa contains the relics of the 16th Karmapa. Opposite that building is a college, Karma Shri Nalanda Institute for Higher Buddhist Studies. For tourist it a unique oppurtunity to understand the concept of Monastery and its importance as an institution of religion and academics in the Bhuddhism. Take a guided tour to understand better. The location of Rumtek wuth flowing streams, mountains behind, a snow range in front, and a river below is enjoyable.

Silk route is a hilly Road connect Lhasa in Tibet via the Jelep La Pass to India. This route now are the parts eastern Sikkim and West Bengal. This route is a mix of ancient history and a rare geographical and natural landscape of eternal beauty. Today what we refer to Silk route is the trail starting from Kalimpong onwards moves ahead via Alagarh, Pedong cross into Sikkim side, then onwards towards the Zuluk, Nathang Valley, Jelep La Pass and ends at Nathula Pass. One can visit the Silk route either approaching it from the Gangtok side and exiting via kalimpong or prefer to start from the Kalimpong side stay at higher altitudes like Zuluk, Nathang Valley, Aritar, Rishi Khola,  Sillery Gaon and return back through Kalimpong route.

North Sikkim & Part of Eastern Sikkim Requires Inner Line Permits because of vicinity to China border. Non Indians are not allowed in East Sikkim and North Sikkim Gurudongmar Lake and need to be accompanied by tour guide for entire North and East Sikkim other than Gangtok. Due to recent guidelines all tourists are advised to make Travel Cards before entering Sikkim. Also while undertaking Sikkim Tour Packages Indian Citizens are allowed with identity proof in form of Voters Card. Non Indians are however free to travel by themselves to South & West Districts. Permits to enter Sikkim are issues for 30 days at a time. Indian tourists need to carry 6- 8 copies of passport size photographs.

Nathu La connects Sikkim with Tibet. The pass is a part of an of the ancient trade route called the Silk Route. Nathu means "listening ears" and La means "pass". The pass is 54 km east of Gangtok, the capital of Sikkim. Only Indian citizens can visit the pass, after obtaining a permits. Nathu La was re-opened in 2006 following numerous bilateral trade agreements. The opening of the pass shortens the travel distance to important Hindu and Buddhist pilgrimage sites in the region. Nathula Pass is closed for tourist on Mondays & Tuesdays. Also due to snowfall and border tensions passes are not issued regularly.

North Sikkim is best known for the high altitude snow peaked mountains, alpine & tundra vegetation and higher up for the barren landscapes. Yumthang Valley, Gurudongmar Lake, Zero Point are the popular tourist attractions. On the way you come across so many waterfalls that you it becomes normal sight within few kms of your journey. North Sikkim also has some popular trek routes of which the Green Lake Trek is the most popular. Dzongu a small village has become popular in recent times due to promotion of village tourism with exposure of Lepcha culture. North Sikkim tourism attract lot of tourists during the March- June, September- December tourist season. Winters & Monsoon are strictly avoidable. 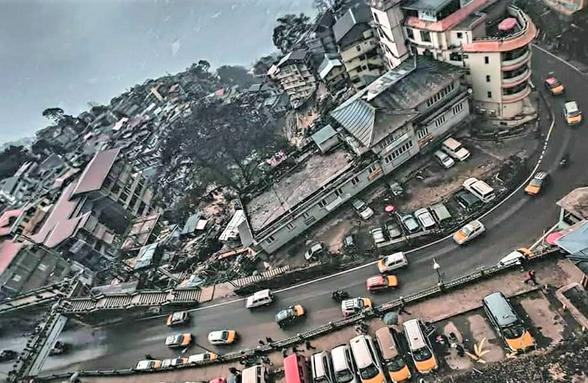 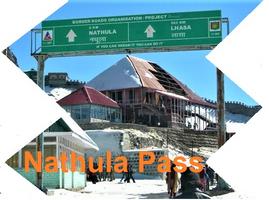 Tsomgo Lake/Changu Lake, is a high altitude glacial lake about 37 kilometres from the Gangtok. With altitude of 12,313 ft, the lake remains frozen during the winter season. The road from Gangtok as well as the lake have some awesome views. Every point you cross is worth a captureYou can enjoy a ride on Yaks here. The lakeside small eateries provide great hot snacks like noodles & momos. 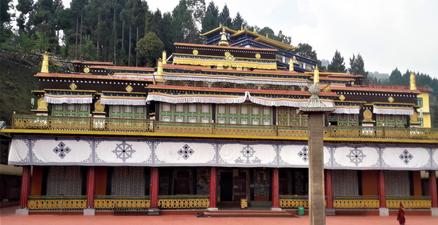 Day 1 NJP Rly Station/Bagdogra Airport – Gangtok (120 Km/ 5 Hours).
Arrival at New Jalpaiguri Station (Siliguri)/ Bagdogra Airport, Pickup by car transfer to Gangtok (5,500 ft). The journey takes you through the Mahananda wildlife sanctuary to start with then once yo reach the hills you will be accompanied by the Teesta river all along the route till Singtham. It takes about 4.5 to 5 hours depending upon the stops you take enroute.

Day 3 Tsongo Lake, Baba Mandir & Nathula.
After Breakfast and getting your permits we travel to Tsomgo Lake (12,400 Ft), a high-altitude sacred lake to both Hindus and Buddhist. After spending time at the lake, you will visiting the Baba Mandir(13,200 Feet). After that we travel to border check post with China, Nathula Pass. Return to Gangtok and spend the evening at MG Marg Shopping. inner and Overnight stay at Gangtok.
Day 4 Gangtok – NJP Rly Station/Bagdogra Airport
After breakfast, Check out from hotel and drive to reach New Jalpaiguri railway station or Bagdogra Airport (Siliguri) or onwards destinations.

​*** This is a sample tour itinerary and you can combine other places of North, West & South Sikkim & Darjeeling and customize depending upon your time & budget. 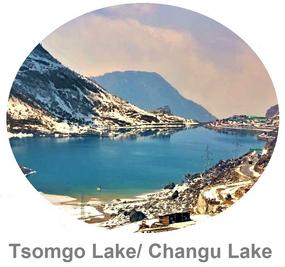 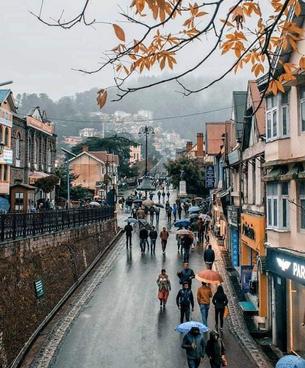 Planning Sikkim Tour Packages? Gangtok, the capital of Sikkim unlike any other hill station in India, is very clean, the traffic is disciplined and local people are very friendly and hospitable. Smoking and tobacco in public places is completely banned across the state. The MG Marg is the heart of town which is also a walking zone with restaurants, bakeries, souvenir & garment shops. Gangtok is most popular destination in Sikkim Tourism Packages and has a very important place in terms of tourism due to its location. Permits for Yumthang Valley & Gurudongmar Lake (North Sikkim), (Tsongo Lake Nathula & Silk Route) East Sikkim are issued from here. Also popular sightseeing places are there around the city. Gangtok has lot of options of accommodation from modest budget home stays to 5 star resorts complete with casinos. The restaurant in the city serves all variety of food. From local cuisine of tradition Tibetian dishes to Bengali dishes to Vegetarian(Jain) food everything is available here. Best stay in Gangtok will in near vicinity of MG Marg as you can enjoy a relaxing time just hanging out in the evening. Gangtok is the center of Sikkim Tour Packages and see lots of tourist arrival throughout the year.