The Yumthang Valley or Sikkim Valley of Flowers is  Shingba Rhododendron Sanctuary with river, hot spring, yaks and grazing pasture on flowery meadows surrounded by the Himalayan mountains. It's altitude is 11,693 ft above and 150 kilometres from Gangtok. During late February and to mid June rhododendron & orchid flowers bloom which appears as a carpet on the valley.  A tributary of the river Teesta all long the the valley and road to Lachung, the nearest town. Yumthang is closed between December and March due to heavy snowfall. There is a hot spring in the Yumthang valley. Skiing is conducted in the valley during November to December when the snowfall is not extreme. Yumthang Valley is most sought after tourist attraction in North Sikkim Tour Packages. 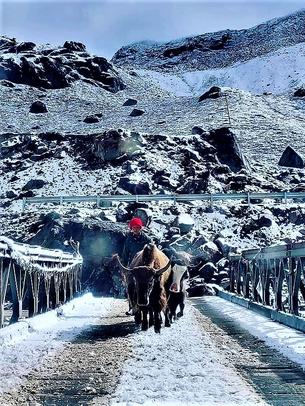 Places Covered: Gangtok - Lachen - Lachung
Day 01: Arrival New Jalpaiguri Railway Station / Bagdogra Airport, transfer to Gangtok (125 Km / 4 Hours ) transfer to Gangtok. Check-in at the hotel and take your refreshment. You can spend rest of the day at leisure or you may go for local sightseeing. Let the excitement grow up for the next day tour. Overnight stay in Gangtok.
Day 02: Drive to Lachen from Gangtok (118 Kilometer/ 6 Hours of Drive): Begin your next day with early morning breakfast in hotel. Check out and drive to Lachen. Lachen is a small hamlet in Sikkim nestled between the foothills of Himalayas. This beautiful journey passes through amazing seven sisters waterfall. Lunch will be offered at a local restaurant on the way itself. Check-in at the hotel after you reach Lachen late in the afternoon. The evening is free. Overnight stay in Lachen.
Day 03: Excursion to Gurudongmar Lake and Drive to Lachung (44 Kilometres/2 Hours of Drive): After breakfast at the hotel drive through snowcapped mountains and enjoy some stunning scenery as you arrive at the Gurudongmar Lake – the most sacred lake in North Sikkim. The lake is situated at the highest altitude (11,800 Feet). Come back to hotel, after taking refreshment check out from the hotel on time and leave for Lachung. Overnight stay in Lachung.
Day 04: Sight Seeing at Yumthang Valley & Drive to Gangtok (118 Kilometer/6 Hours of Drive): Start your day with the healthy breakfast in hotel and get ready for next scheduled drive towards Yumthang Valley situated at nearly at nearly 11,800 feet. Yumthang is a valley surrounded by towering snow covered mountains. The ethereal beauty is grace for all visitors. After your visit is concluded, return to your Lachung hotel for Lunch. Post lunch you will be driven back to Gangtok. You reach you hotel in the evening.
Day 05: Gangtok – New Jalpaiguri Railway Station / IXB airport (125 kms / 3 Hours Drive ): After breakfast check out from hotel on time & transfer to NJP (New Jalpaiguri Junction) Railway station / IXB (Bagdogra) Airport for your onward journey. With this your North Sikkim Tour Package ends.

​Gurudongmar Lake is one of the highest lake in India, at an altitude of 16,900 ft is one of the most vsited place in North Sikkim Tour Packages. It is considered sacred by Buddhists, Sikhs and Hindus. The lake is named after Guru Padmasambhava. The lake is located 190 kilometres from Gangtok, and about 5 kilometres south of the China border. The nearest town to stay is Lachen. The lake can be reached by road from Lachen via Thangu. The road from Thangu to Gurudongmar passes through rugged terrain with high alpine vegetation covered with rhododendron trees. While Indian tourists are allowed to visit the lake, foreigners need a special permit. A legend related to the frozen condition of the lake is linked to the visit of Guru Padmasambhava to the lake, on his way back from Tibet.  As the lake remained frozen most of the year & drinking water was short in nearby area, the people of the area appealed to Padmasambhva to help them. The Guru placed his hands on a small part of the lake area, which stopped freezing during winter, facilitating drinking water to the people. 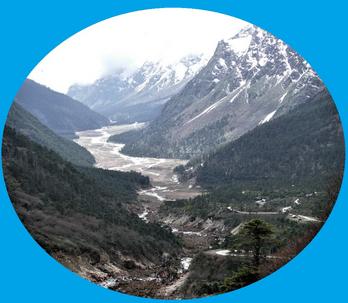 North Sikkim Tour is best known for the high altitude snow peaked mountains, alpine & tundra vegetation and higher up for the barren landscapes. Yumthang Valley, Gurudongmar Lake, Zero Point are the popular tourist attractions. North Sikkim landscape matches that of Ladakh and often referred to Ladakh of East. Yumthang valley in very unique due its orchid that bloom during the spring & summer season making it one of the most popular place for tourist. On the way you come across so many waterfalls that you it becomes normal sight within few kms. of your journey. North Sikkim also has some popular trek routes of which the Green Lake Trek is the most popular. Dzongu a small village has become popular in recent times due to promotion of village tourism with exposure of Lepcha culture. North Sikkim tourism attract lot of tourists during the March- June, September- December tourist season. Winters & Monsoon are strictly avoidable. To visit North Sikkim one need to obtain inner line permits, non Indians are only permitted till Lachung but with local guides. Also North Sikkim is cut from the other parts state most of the time due to landslides and no permits are issued in anticipation of bad weather other than 3-4 months in a year. It is wise to plan a tour to North Sikkim with a tour operator with local knowledge of these factors and keeping in mind of the uncertainty. In cases where such thing occur you can of course take a detour to east, south or west Sikkim. Best time for North Sikkim Tour Packages is between April to June & September to December.

Dzongu, a reserved area of the Lepchas, the original inhabitants of Sikkim. The Lepcha Communities in Dzongu lives in relative isolation from the modern outside world with their own traditional practice and beliefs. The village is 30 minutes ahead of the Seven Sisters waterfall. Dzongu is surrounded with panoramic views of Mt. Kanchenjunga and is rich in flora and fauna. Dzongu is being promoted as a village tourism destination and offer homestay accommodation. You can stay with local families and experience the Lepcha lifestyle and cultural traditions amidst luxuriant landscape and spectacular mountain scenery. You can go for village hikes, visit the rich cardamom fields or check out the cane bamboo bridge at Passingdon. In the evening a special cultural programme can be arranged on demand. 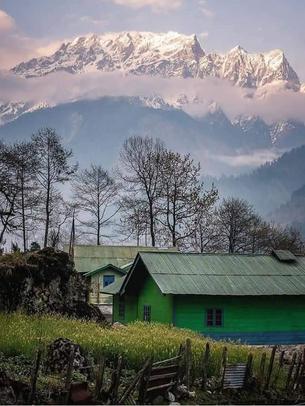 How much will it cost for a trip to North Sikkim?
North Sikkim Tour Packages for 2 Night 3 Days ex Gangtok are available starting from Rs 3500/- onwards to 4500/- for shared packages depending upon the season of travel. For reserved tour it will cost you anything between 35000/- to 50000/- depending upon your choice of hotel for a group of 8 person.

Which are the best places to visit in North Sikkim?
Gurudongmar Lake: A sacred lake for Buddhists and Hindus alike, this lake is one of the most famous places to visit in North Sikkim. The lake lies at an elevation of 17,800 feet. Yumthang Valley: Covered with the sheets of snow, the Yumthang Valley is a go to spot for trekkers and adventure enthusiasts. Lachung: Offering uninterrupted sceneries of the Himalayas, the quaint valley of Lachung is a very famous picnic and camping spot. People usually come here to camp along the stream of the river. Seven Sisters Waterfall: As the name suggests, this waterfall is a combination of seven different streams of water which further make a giant pool on the rocks. Lachung Monastery: One of the most beautiful places to visit in North Sikkim, this monastery boasts of having a pure aura and very peaceful atmosphere. Bhim Nala Falls: This gushing waterfall is known for its humongous height and the fast stream of water which creates a milky formation below it.

Why it is called Zero Point in Sikkim?
Zero Point Sikkim (Yumesamdong) is situated at an elevation of 15,300 ft. in the North District of Sikkim, India. This place is called Zero Point because there is no motorable road after this place and the visitors are not permitted to go beyond this point due to its proximity to the Chinese border.

Can one directly go to Lachung & Lachen from Siliguri/NJP?
Yes one can directly go but it takes 9 to 10 hours journey and you get to Mangan Police Station before 2 pm to get your permits. 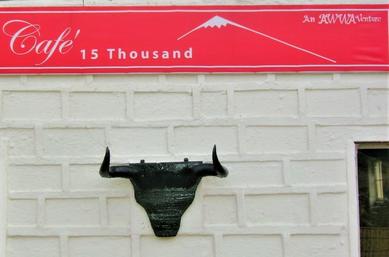 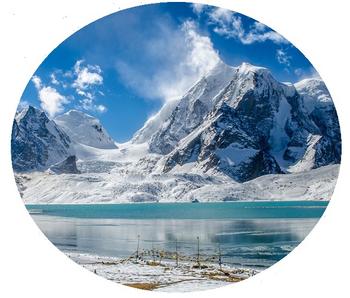 Drop Your Details, We Will Call You! 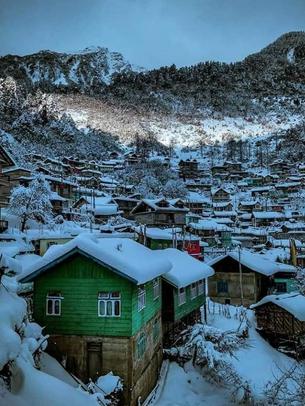 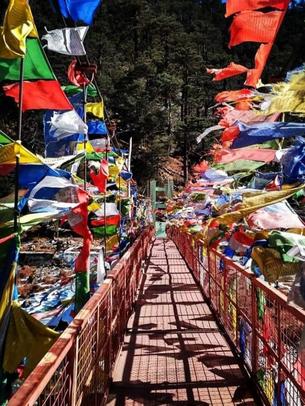